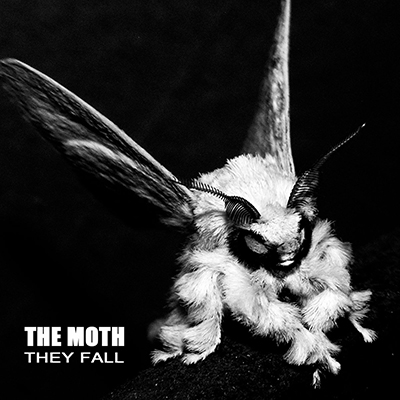 “Now here is a great band that flew right under my radar. The Moth is a Psych based Sludge/Stoner Metal band that fans of Baroness, Kylesa and Mastodon will surely love like I did. Their debut album – They Fall – is 11 excellent hard-rocking tracks full of epic riffs. The dual vocals of Cécile and Freden give the album a real edge. Sometimes they feel they are having a duel at times. At it makes the album ever more intriguing. These are some original and very different vocals you do not hear much of within the Sludge/Stoner Metal scene. The album is expertly played and produced through out. If you like you’re Sludge/Stoner Metal with an extra layer of lo-fi psychedelic fuzz based vibes then you can’t go wrong here. The Moth deserves your attention now. This album came as a real surprise to me when the band originally contacted me. The album cover might not give anything away but as the famous saying goes – Appearances can be deceiving – Or – Never judge a book by its cover. And both of them are true for The Moth. You want more evidence of how great this band is. Check out excellent tracks – Rawhawk, This Is The Lie and my fave track – They Fall.
Look this album is testament that Germany have another excellent Sludge/Stoner Metal band to call upon. It could be that these Sludge Rockers could be one of my fave discoveries of 2013. Excellent and Highly Recommended.” ( sludgelord )