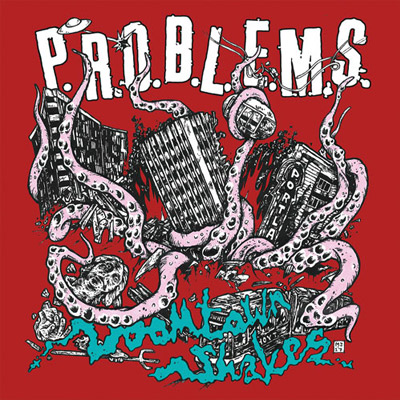 Does this band need any introduction? Ugh…alrighty then, if you’ve lived under a rock for the last 6 to 8 years – this is for you:
P.R.O.B.L.E.M.S. from Portland, Oregon is a 5 piece Rock’n’Roll / Punkasfuck / Hardcore Monster which consists of several punkrock veterans out of Portland. Members have managed to do some mischief in bands like Pierced Arrows, Dead Moon, Defiance, Detestation, Severed Head Of State, Soda Pop Kids or current bands like Don’t, Hellshock and Breaker Breaker.
That should give you a general idea of what this band and this new record is all about.
Powerful Punk’n’Roll with sleazy guitars, a tight rhythm section and a frantic singer with just the right amount of snottines. The juggernaut DOOMTOWN SHAKES comes with Jonny as the new singer and it’s the logical result of their two previous records. P.R.O.B.L.E.M.S. are a crazy ride on a rusty roller coaster train that is about to derail. With so much drive, I wonder why they need an afterburner in the first place … but here we go: