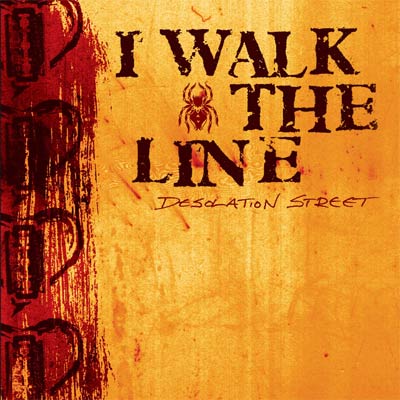 If Mike Ness had been Scandinavian and grown up in a funeral parlor, he might have formed a band like Helsinki’s I Walk the Line.

Regardless of their name, about the only thing the quintet (which features members of Manifesto Jukebox and Wasted) shares with Johnny Cash is his air of rebellion wrapped in a confident cool.
Instead of country, the band revels in dark, organ-driven punk that owns both a greaser’s swagger and love of rock & roll, but with a much smoother and more composed delivery than any of their raucous Gearhead peers. Desolation Street is tough yet vulnerable, owning a certain flair for nocturnal dramatics (the organ does it every time) that constantly swirl amidst the backdrop of clean guitars and punchy percussion. Their vulnerability is mostly due to the focus falling on lead singer Ville Rönkkö’s bruised bellow, his heavily accented delivery both endearing and defiant as he proclaims lines like “I just wanna be loved, like everybody does, without feeling guilty and ashamed/ I just wanna get drunk, like everybody does, without feeling like a loaded gun.” The extremely light-footed “When I’m Gone” quickly stakes claim as the perfect backdrop to driving with the windows down on a warm night and is a true highlight in a set that never really lags, but elsewhere has a rather uniform feel. This isn’t so much a complaint as an observation; I Walk the Line is simply consistent. And consistency, especially when it amounts to an album like Desolation Street, is never a bad thing.